Josh Rosen led the Arizona Cardinals (3-9, third in NFC West) to an improbable 20-17 win over the host Green Bay Packers. Rosen was 11-26 for 149 passing yards with no TDs or interceptions. He rushed for 33 yards on one play, but also had a -1 on anther for a total of 32 yards. Depending on whose stats you go by Rosen is either 30th out of 31 qualifying quarterbacks in Total QBR (ESPN) or 30th among all QBS (NFL). Either way, it’s not very good, but given his rookie status, you hope he’s learning and that the Cardinals will provide him with a better supporting cast in years to come. 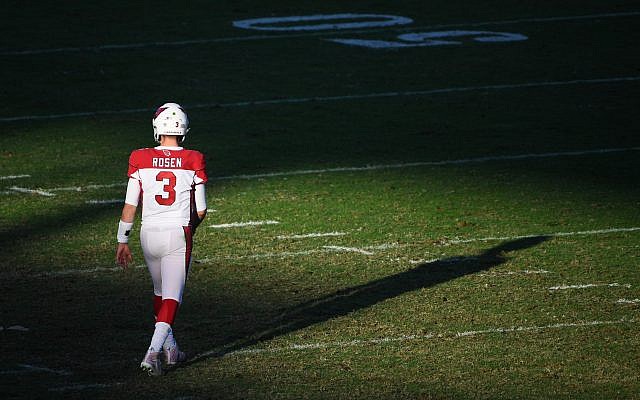 Mitchell Schwartz played all 71 offensive downs for the KC Chiefs and another seven (22 percent) as the KC Chiefs (10-2, first in AFC West) held off a late charge by the host Oakland Raiders for a 40-33 win.

Ali Marpet appeared on all 65 offensive plays for the Tampa Bay Buccaneers (5-7. third in NFC South) plus another four (17 percent) as his crew beat the visiting Carolina Panthers, 24-17.

Safety Jordan Dangerfield appeared in 19 special teams plays (63 percent) and recovered one of the team’s own fumbles as the Pittsburgh Steelers (7-4-1, first in AFC North) gave up 18 fourth quarter points to the visiting LA Chargers to lose, 33-30, the winning score coming on a field goal with 4:10 left to play.

Greg Joseph did not attempt a field goal for the Cleveland Browns (4-7-1, fourth in AFC North) in their 29-13 loss to the host Houston Texans. he made one PAT, the browns failing on a two point conversion following their second TD.

It was pointed out to me during the NY-Chicago game that the Bears have two players with apparently Jewish surnames (Tarik Cohen and Eddie Goldman), neither of whom are MOT. “A rose by any other name…”