Archive for the ‘Appearances’ Category Had a grand old time in my return visit to the Bergino Baseball Clubhouse, Jay Goldberg, proprietor, to discuss the new book, Hank Greenberg in 1938: Hatred and Home Runs in the Shadow of War

Goldberg is a real mensch and a friend to the author. He holds these “salons” frequently and the audience that shows up is always welcoming, knowledgeable, and inquisitive (if sometimes challenging in the question-and-answer portion of the program).

Happy to say it was standing room only with new friends and old ones such as Perry Barber, a professional umpire and former Jeopardy champion, and Lee Lowenfish, educator and author of several baseball books including the award-winning Branch Rickey: Baseball’s Ferocious Gentleman

Not only did we sell out of books, but I came away with some lovely parting gifts. I feel like I want to write another baseball book just so I can go back to Bergino. You can get an idea of the festivities from this video, which for the sake of brevity (and bandwidth) edits out a lot of the great Q&A:

Sorry, but you have to strike while the iron is hot…

I’m not much for self-promotion, but the older I get, the less I care what people think of me.

That said, if anyone is looking for a guest on their baseball, Jewish, or Jewish sports-related show/podcast/article/etc., in the words of one of the lesser-known Beatles songs, “You Know My Name (Look up The Number).” One of the unfortunate aspects of the story is that some of the problems that plagued the U.S. and the world in 1938 have returned. So maybe I shouldn’t be smiling here. Had a couple this morning about the Greenberg book, one with WKNY in Kingston, NY, and this, from WKLB-FM in Lafayette, Louisiana.

I wonder what the Jewish population is down there?

Took one of my rare trips into the jungles of Manhattan to see Howard Megdal, he of the new book The Cardinals Way: How One Team Embraced Tradition and Moneyball at the Same Time at the Bergino Baseball Clubhouse.

It’s always great to reconnect with old friends. Jay Goldberg, Bergino’s congenial owner/event host is always kind to his guests, taking the time to note authors that have had events in his establishment who might be in attendance. Last night’s group included Lee Lowenfish, winner of Spitball’s Casey Award for his 2007 biography Branch Rickey: Baseball’s Ferocious Gentleman; Greg Prince, whose  new book —  Amazin’ Again: How the 2015 New York Mets Brought the Magic Back to Queens — comes out March 15; and myself.

In addition to Cardinals, Megdal — the busiest man in journalism (he writes for more print and on-line publications than I can track) — is also author of all The Baseball Talmud: The Definitive Position-by-Position Ranking of Baseball’s Chosen Players; Taking the Field: A Fan’s Quest to Run the Team He Loves; and the e-book Wilpon’s Folly: The Story of a Man, His Fortune, and the New York Mets.

On a more personal note, Megdal was responsible for my gig as a talking head on the PBS screening of Jews and Baseball: An American Love Story a few years back and Skyhorse asking me to do my book on the Maccabiah Games.

If my wife and I had another kid, I might have had to make Megdal the godfather.

Peter Ephross discusses his book Jewish Major Leaguers in Their Own Words: Oral Histories of 23 Players at a bagel brunch on Sunday, Oct. 6, at Congregation B’nai Jeshurun, Short Hills, NJ, at 9:45 a.m. Call 973-379-1555.

Be there or be square

My new Facebook buddy Oliver Horovitz, author of An American Caddie in St. Andrews: Growing Up, Girls, and Looping on the Old Course, and I will be chatting about stuff at the St. Louis Jewish Book Festival on Nov. 6, I’m hoping the Cardinals will have won the World Series by then so people will be in a good mood.

Before this Thursday’s Varsity Letters event at The Gallery at LPR, Gelf interviewed all three of our speakers about the topic at hand:

The FREE September 12 Varsity Letters event will take place at The Gallery at LPR in Manhattan’s West Village.

Attendees must be 21 or older, as per LPR rules. (Email michael@gelfmagazine.com if you are under 21 and would like to attend the events. The farther in advance, the better; no guarantees.)

The return of 'shameless self-promotion'

It’s been fairly quiet on the 501 Baseball Books…

front lately, but things are looking up.

* Recently I was the subject of this on-line Q&A with on the Sherman Report, a site that considers sports media.

* In the very near future, another one of those should be up on Mark’s Epehmera. Mark Aubrey serves as my unofficial watchdog/editor/adviser because, as you know if you been reading my blogs long enough, I’m not the best proofreader in the world.

* Finally, if you’re around on Sunday at 8:30 p.m., I’m scheduled to be a guest on The Talk of New York Sports, hosted by Bill Donohue, on WGBB, 1240 AM on Long Island and streaming live on-line at sportsradiony.com. Don’t worry, I’m sure I’ll be done in time for you to catch the final-season premiere of Breaking Bad. 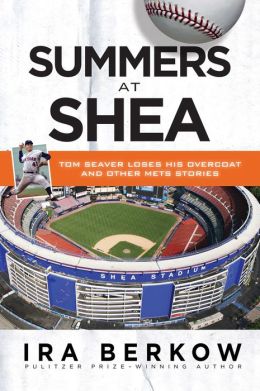 Pulitzer Prize-winning sportswriter Ira Berkow will discuss his eventful time around the New York Mets at the Yogi Berra Museum & Learning Center located on the campus of Montclair State University in Little Falls on Monday, July 15, at 6 p.m., followed by a signing of his new book Summers at Shea.

In a distinguished journalism career that spans the Mets’ colorful history, Berkow, a former New York Times columnist, has covered every major Mets personality, from Casey Stengel to Tom Seaver and Darryl Strawberry to David Wright. Summers at Shea is culled from 50 years’ worth of reflections, personal stories and opinions on major players and events.

Berkow’s appearance at the Museum coincides with the Mets hosting the 2013 All-Star Game at Citi Field, as well as the 40th anniversary of the Mets’ improbable 1973 National League  championship team, managed by Yogi Berra.

With Ira Berkow, center, and Marty Appel at the Yogi Berra Museum in 2011 (when I had lots more hair).