Archive for the ‘Jewish authors and sportswriters’ Category It’s been a while since I posted any news about the Maccabi sports movement, including the Maccabiah Games. Here’s an attempt to remedy.

You can see that the Maccabi movement in Great Britain is very active. One of my regrets during my recent trip to England was not being able to visit them, as well as missing out on the British Baseball Federation. Oh, well, maybe next time.

You can’t click on the image to access the page, so just drop them an email or call ’em up.

Here’s a piece from the NJ Jewish News I wrote about Jeff Bukantz and other locals who participated in the 2013 Games. I know there are other stories about JB, including a discussion of his book about his dad, Daniel, himself a fencing legend, but unfortunately they don’t appear to be on the NJJN website.

And finally, finally, some shameless self-promotion: if you are interested in having me speak to your synagogue or group about my book, The Jewish Olympics: The History of the Maccabiah Games

(or any of my other books for that matter), drop me a line and let’s chat.

I’ve been looking to participate in Gelf Magazine’s “Varsity Letters” program for years. The dream comes true July 24. Hope to see you there. Here are the details:

Varsity Letters is back at The Gallery at Le Poisson Rouge on Monday, July 24, with four authors of recently released books about baseball:

• Sports Illustrated writer Jay Jaffe, author of The Cooperstown Casebook: Who’s in the Baseball Hall of Fame, Who Should Be In, and Who Should Pack Their Plaques

• Ron Kaplan, author of Hank Greenberg in 1938: Hatred and Home Runs in the Shadow of War

Doors open at 7.
Event starts at 7:30.
There is no admission charge.
Attendees must be 21 or older, as per Le Poisson Rouge rules. (Email varsityletters@gmail.com if you are under 21 and would like to attend. The farther in advance, the better; no guarantees.)

Then, on August 16 at 1 p.m., I’ll be serving as “closer” for the Baseball Hall of Fame’s Annual “Author’s Series.” From the Hall’s announcement:

Our Authors Series brings noted baseball authors to Cooperstown for special lectures and book signings during the summer months. These programs are included with the cost of admission.

On Wednesday, August 16th at 1pm, the Hall of Fame will welcome author Ron Kaplan as he talks about his new book, Hank Greenberg in 1938: Hatred and Home Runs in the Shadow of War.

From his first day in the big leagues, Hank Greenberg dealt with persecution for being Jewish. The Hall of Famer always did his best to shut out the bigotry, but in 1938, that would prove more difficult then he could have imagined. Author Ron Kaplan examines Greenberg’s 1938 season in incredible detail. While Greenberg was battling at the plate, the Jewish people overseas were dealing with a humanitarian crisis. Adolf Hitler had taken direct control of the country’s military in February of 1938 and then began a methodic takeover of all neighboring countries, spreading Nazism and the Holocaust.

Hank Greenberg in 1938 chronicles the events of 1938, both on the diamond and in the streets of Europe. As Greenberg took aim at Babe Ruth’s home run record, Hitler’s “Final Solution” was beginning to take shape. Jews across the United States, worried about the issues overseas, looked to Greenberg as a symbol of hope. Though normally hesitant to speak about the anti-Semitism he dealt with, Greenberg knew that he was batting for so many of his own people, particularly those living with life and death on the European continent.

The program includes a presentation in the Bullpen Theater, followed by a book signing in the Library Atrium. Presentation at 1 pm. Book signing at 1:30 pm.

Honorable Menschen: My night at the Bergino Baseball Clubhouse For me, it’s like being a two-time MVP. I had the chance to speak again at the Bergino Baseball Clubhouse in Manhattan on May 3 to talk about Hank Greenberg in 1938: Hatred and Home Runs in the Shadow of War

. Jay Goldberg is a true friend of baseball writers, giving them a chance to discuss their work with an audience that is always welcoming and whip smart when it comes to the game.

It’s also nice to reconnect with old friends and Bergino regulars like author and educator Lee Lowenfish and Perry Barber, a professional umpire and former Jeopardy winner. Perry presented me with t-shirts she had made bearing the book’s cover, a very sweet gesture. And Jay gave me a goodie bag that rivaled those handed out at the Academy Awards as far as I’m concerned. Oscars are a dime a dozen, but I’m willing to bet cash money that none of those people has an official Bergino bobblehead, so there.

As the various teams start to get together in preparation for the World Baseball Classic, here’s what’s doing with Team Israel, as well as the JMLs who have plighted their trough elsewhere. 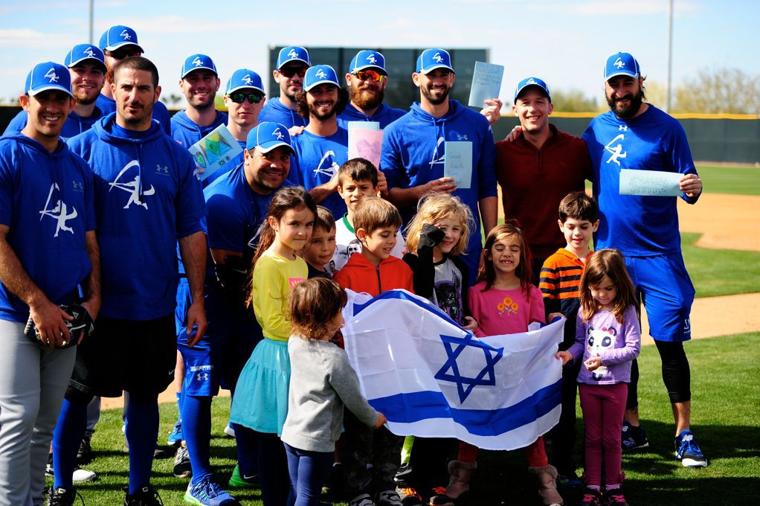 Kicking up their heels for Maccabiah

Hard to believe the 2017 Maccabiah is just a few months away. And because these are the 20th games, you know it’s going to be a major deal.

Fundraisers and tryouts are already under way. Here’s a piece about an octet of athletes from a dojo in New York that are already gearing up for the competitions.

For those looking to catch up with the story behind the quadrennial event, I humbly offer The Jewish Olympics: The History of the Maccabiah Games

. Who knows, maybe I’ll be updating it after July.

Lest we forget: Peter Horvitz

with his son Joachim, died in Raleigh, NC, last Saturday at the age of 71.

This was one of those Jewish “reference books” I’m betting a lot of kids received as a bar mitzva or Hanukka present.

JNS used him as the main source for a story on “Forgotten Jewish baseball players” in 2012.

HT to Bob Wechsler for the sad news.

Do the ‘write’ thing, Zach Hyman

Knowing how brief a professional sports career can be, you have to say good on him for preparing for his next act.

while plenty of athletes figure they can be a school coach or private instructor, it’s refreshing to see someone like Hyman — a center for the surprising Toronto Maple Leafs — look outside the both. I can’t say for sure since I’ve never met any, but the word is that despite the violence and “thuggery” of ice hockey, the players are the nicest, generally speaking, in any of the major professional sports. Considering Hyman’s work, I’m inclined t give that the benefit of the doubt.

People of the book: The Dykstra debacle

As you might have noticed from my weekly posting about baseball best-sellers, I’m not overly happy that Lenny Dykstra’s new memoir, House of Nails, is doing well. It came in at No. 11 on the most recent New York Times best-seller list for non-fiction. 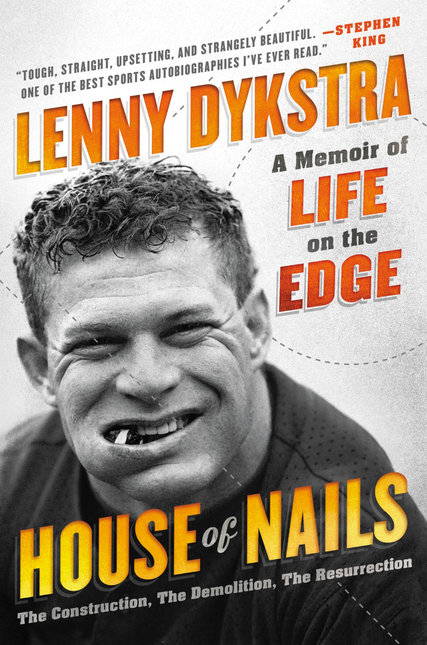 This isn’t a case of schadenfreude. It’s that people are more interested in dirt from someone who many wouldn’t even consider a celebrity than more important issues from writers who toil so hard for such little return. As landsman Richard Sandomir, the Times‘ sports media columnist observes in his recent review, several interviewers — mostly, it seems, of the low-brow sports-talk radio shows, dote on Dykstra as if he was some sort of hero, kissing his butt with bro-praise, ignoring the terrible things he claims to have done to get ahead, including hiring private detectives to get dirt on umpires as possible blackmail material.

This is what holds our interest at a time when citizens and polic offers are being killed with sad regularity and the November elections portend such dire results?

… is not an eloquent autobiography, like Andre Agassi’s Open, and is more in keeping with the spirit of Jose Canseco’s Juiced. It is not explosive, unless his accusation that the former Mets manager Davey Johnson drank a lot is big news. It is rather a narcissist’s delight, so relentlessly focused on Dykstra’s ego and antics that you need to rest occasionally from the Lenniness of it all.

At least Canesco’s book served a purpose in bringing to light the reach of PED, even though many in the baseball hierarchy sought to turn a blind eye to the situation. What life lesson is Dykstra offering?

Add to that his firing of veteran author Peter Golenbock (another landsman) as his co-writer because, as Sandomir writes, “Dykstra said he had needed to take control of the book to preserve his singular voice, which is notably profane and blustery and as obsessed with sex as a pubescent boy.”

(I’ve also lost some respect for Stephen King, whose blurb is featured on the cover. Unless it’s one of those situations where the publisher cobbled together words that King included in his assessment, although not necessarily in the order in which it appears.)

I often link the books in these entries to the Amazon page, hoping to earn a few coins if some of you readers decided to order the various merchandise. Not this time.

Took one of my rare trips into the jungles of Manhattan to see Howard Megdal, he of the new book The Cardinals Way: How One Team Embraced Tradition and Moneyball at the Same Time at the Bergino Baseball Clubhouse.

It’s always great to reconnect with old friends. Jay Goldberg, Bergino’s congenial owner/event host is always kind to his guests, taking the time to note authors that have had events in his establishment who might be in attendance. Last night’s group included Lee Lowenfish, winner of Spitball’s Casey Award for his 2007 biography Branch Rickey: Baseball’s Ferocious Gentleman; Greg Prince, whose  new book —  Amazin’ Again: How the 2015 New York Mets Brought the Magic Back to Queens — comes out March 15; and myself.

In addition to Cardinals, Megdal — the busiest man in journalism (he writes for more print and on-line publications than I can track) — is also author of all The Baseball Talmud: The Definitive Position-by-Position Ranking of Baseball’s Chosen Players; Taking the Field: A Fan’s Quest to Run the Team He Loves; and the e-book Wilpon’s Folly: The Story of a Man, His Fortune, and the New York Mets.

On a more personal note, Megdal was responsible for my gig as a talking head on the PBS screening of Jews and Baseball: An American Love Story a few years back and Skyhorse asking me to do my book on the Maccabiah Games.

If my wife and I had another kid, I might have had to make Megdal the godfather.