Archive for the ‘Jews and baseball’ Category

Congrats to Joc Pederson and the LA Dodgers. By beating the host Milwaukee Brewers, 5-1, on Saturday, they return to the Fall Classic where they will take on Ian Kinsler and the Boston Red Sox beginning tomorrow night at famed Fenway Park.

Pederson started in left field came out for a pinch hitter in the third inning after grounding out in his only at-bat leading off the game. Overall, he had three singles in 13 official plate appearances.

Ryan Braun was 0-for-4 in the deciding game. He had seven hits, including two doubles, in 29 at-bats and drove in four runs. The New York Times ran a nice feature on him on Saturday. 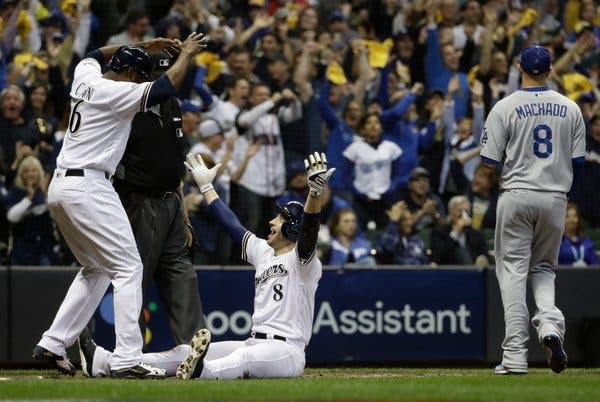 By the way, in case no one else mentions it among the hundreds of pre-Series background stories and fillers, Fenway — which opened in 1912 — and Dodger Stadium — 1962 — are two of the oldest ballparks in the Majors; only Wrigley Field (1916) is older than the Dodgers’ home field.

Another “fun fact” — the last time these two teams faced off in the World Series was back in 1916 when the Dodgers were known as the Brooklyn Robins (named after their beloved manager Wilbert Robinson). The Sox took the championship that fall, four games to one.

Congrats to the Boston Reds Sox. Their 4-1 win over the host Houston Astros puts them back into the World Series. Ian Kinsler  was 2-for-4 as the starting second baseman, including a double and a run scored. Ales Bregman, once again at the top of the Astros’ lineup, was once again hitless, going 0-for-4 with two strikeouts.

Between the two MOTs, Bregman giveth…

And Bregman taketh away…

Now Boston has to await the winner of the Milwaukee Brewers (Ryan Braun) – Los Angeles Dodgers (Joc Pederson) NLCS with the former trailing the latter three games to two. That could be over tonight.

It took a circus catch by Andrew Benintendi to prevent Alex Bregman from being a hero once again for the Houston Astros.

The home team had the bases load with two out in the ninth and trailing the visiting Boston Red Sox, 8-6. If the ball drops, two runs would have scored, and if it got by Benintendi, the game would have been over. As it was, the Sox took a three-games-one advantage with the victory.

Perhaps it’s because he’s been so selective at the plate (11 walks in the post-season), but the Astros moved Bergman into the lead-off spot where he went 0-for-5.

Ian Kinsler appeared as a defensive replacement for the Sox in the ninth.

Meanwhile, the Dodgers took a 3-2 lead over the visiting Milwaukee Brewers with a 5-2 win. Joc Pederson came on as a defensive replacement in the fourth inning and was 1-for-2 over the rest of the game.

Ryan Braun was 0-for-3 with a walk for the Brewers.

Game Six will have to wait for the teams to return to Miller Park tomorrow.

It took 13 innings and five hours and fifteen minutes for the LA Dodgers to beat the visiting Milwaukee Brewers, 2-1. Ryan Braun had three singles in six trips to the plate and stole a base with two out in the tenth.

Joc Pederson entered the game as a defensive replacement in the seventh inning and was hitless in three at-bats.

Shawn Green, who ranks second on the all-time home run list for MOTs behind Hank Greenberg, threw out the ceremonial first pitch.

Meanwhile, back at the ranch…

The Boston Red Sox beat the host Houston Astros, 8-2, thanks mostly to a grand slam by Jackie Bradley Jr. Ian Kinsler started the game and was 0-for-3, remaining hitless in the LCS. He came out for a pinch-hitter in the eighth.

Alex Bregman put on a defensive clinic, to paraphrase Ron Darling, making several excellent plays at third. Bregman tied the game at 2-2 in the bottom of the fifth with a double to left, one of two hits he had in three official at-bats. He also walked — the 11th time he’s received a free pass in the post-season — to boost his OPS to a mind-boggling 1.214. More here.

As the saying goes, Ryan Braun drove in the only run the Milwaukee Brewers would need in their 4-0 win over Joc Pederson and the host LA Dodgers last night.

Braun hammered a one-out RBI double down the left field line in the opening frame.

He could have had an eighth-inning single following Christian Yellich’s bunt hit, but Yasiel Puig deked the base runner into thinking he would catch the ball on a fly and threw to second for the force out.

In the multiverse, this actually happened.

Pederson got the starting assignment in left, going 0-for-3. Mazel tov to him and his wife, Kelsey, on the birth of their daughter, Poppy Jett, on Sunday.

The ALCS returns tonight as well as Ian Kinsler and the Boston Red Sox visit Alex Bregman and the Houston Astros. That series is tied at a game apiece. Bregman’s star is evident in Texas, but the postseason — both this year and last — is getting him wider recognition.

Can it be more even? Both series are tied at a game apiece as of this writing.

Ryan Braun and the Milwaukee Brewers host Joc Pederson and the LA Dodgers in the NCLS which begins tonight.

Bregman’s post-season experience was more limited than his fellow JMLs, but he wasn’t cowed by the pressure. Nor is he shy about expressing his opinion that the networks should be showing his team in prime time, and not just going to the default setting of Yankees-Red Sox. To be fair, the New York-Boston rivalry goes back generations, so it’s understandable that that would be the go-to move. Lifetime against Red Sox: 13 games, four home runs, 10 RBI, .245 BA.

Author Dan Schlossberg contributed this piece to Forbes on the surprising (to some) number of Jews in the 2018 post-season.

I’m guessing this is a first: each of the four teams going into the League Championship Series have a MOT on the roster. That comes after the Boston Red Sox held off the host NY Yankees, 4-3 top move on.Ian Kinsler started at second base and gave the team a 2-0 lead with an RBI double in four at-bats, his second two-bagger of the series. He also scored a run.

Meanwhile, over in the NL, Joc Pederson and the LA Dodgers visit Ryan Braun and the Milwaukee Brewers beginning Friday.

Of course this scenario guarantees that once again there will be opposing JMLs in the fall classic (Pederson v. Bregman last year).

Congrats to Alex Bregman and the defending World Champion Houston Astros who move on the the ALCS following their three-game sweep over the Cleveland Indians. Bregman continued his excellent season by going 5-for-9 with home runs in the first two games. He also had a double, four walks, and four RBI.

Also, congrats to Ryan Braun and the Milwaukee Brewers who move on to the NLCS following their three-game sweep of the Colorado Rockies. Braun had five singles in 13 at-bats plus a stolen base.

UPDATE: The LA Dodgers beat the Atlanta Braves, 6-2, to move on as well. Joc Pederson was 1-for-6 last night, 4-for-14 overall, including a double. His one home run led off the first game and gave the Dodgers the only run they would need in their 6-0 victory.

Max Fried appeared in all four games, including retiring the only batter he faced last night. He was perfect in the first two games, but gave up a homer in the third meeting. Totals: 2.1 innings, one run, one hit, one walk, one strikeout.

The means there’s only one series left. Last night the Boston Red Sox embarrassed the host NY Yankees, 16-1. Ian Kinsler did not start, but he came in as a defensive replacement in the seventh, going 1-for-1 with a walk and scoring twice. Overall, 3-for-9 with a double and an RBI.

Had a great time in Old London Town last week. Tried to get some baseball stuff going over there, but it was a fool’s errand. The British Baseball Federation website had an address that was years-old. I found that out the hard way, making a trip out there in hopes of exchanging a copy of 501 Baseball Books for a team cap. Alas, ’twas not to be.

But I did give a the book to the Kennsington Hotel library, so I was able to accomplish at least part of my “mission.” While at the Kennsington, my wife and I thought we might try to go to a local synagogue. As we used the hotel computer to search for something suitable (we neglected to bring along clothing appropriate to going to shul), we also made the acquaintance of Ken and Lynn Tepper, a lovely couple from Toronto who overheard out conversation. Landsmen! Ken asked if I happened to be the Ron Kaplan who wrote Hank Greenberg in 1938, which he had read. In addition, his son — who participated and coached in several Maccabiah Games for Team Canada — had read my book on the history of that institution. Small world.

Our encounter reminded me of a scene from one of my favorite movies, That Thing You Do, when Guy Patterson, the group’s drummer meets his idol, legendary jazz man Del Paxton who’s playing at an LA club. The cocktail waitress, brings him over to Paxton and some cronies, saying, “This kid has actually heard of you.”